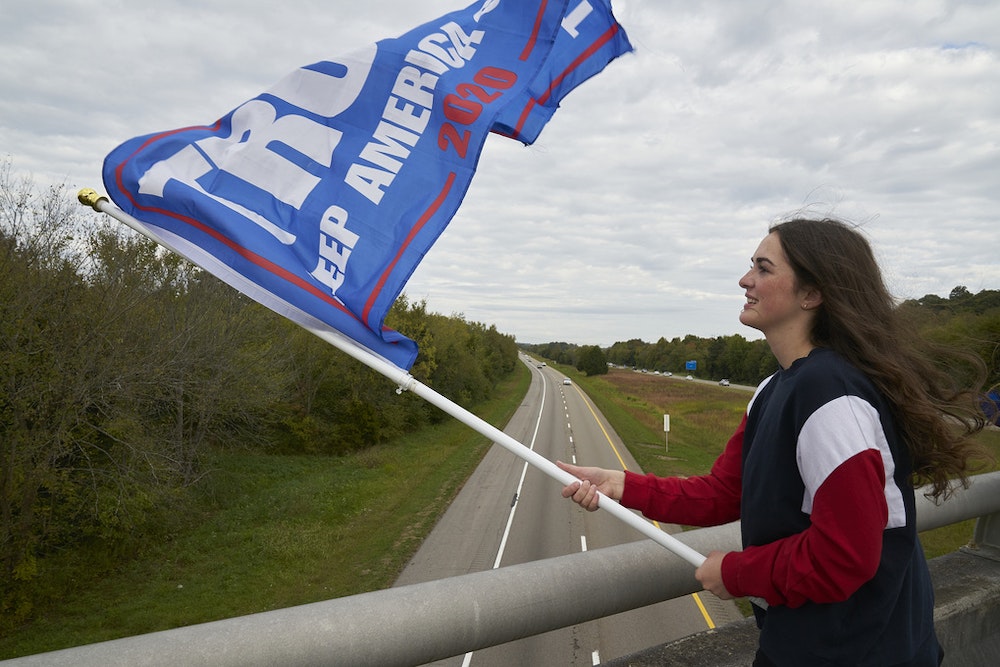 The new congregation is gathered in a barn in Lenoir City, Tenn., with a roof that has a 60-foot American flag painted on it. And they are praying for a Trump landslide.

Standing in a circle, the dozen or so men and women, young and old, lay their hands on their pastor, Ken Peters, as he raises their requests to God.

He prays that “communism and socialism and transgenderism and homosexuality and abortion will not have their way in this land.”

He prays that the nation’s “Christian roots” will remain, that the church of Jesus Christ will be a “restraining power.”

“God, this nation is a miracle for you,” Peters continues. “You rescued us, and you gave us our independence for a purpose.”

After another “amen,” the service begins with everyone’s hands raised to “Here I Am to Worship,” a popular contemporary Christian song performed in many evangelical churches.

This is a Patriot Church, part of an evolving network of nondenominational start-up congregations that say they want to take the country back for God. While most White conservative Christian churches might only touch on politics around election time and otherwise choose to keep the focus during worship on God, politics and religion are inseparable here. The Tennessee congregation is one of three Patriot Churches that formed in September. The other two are near Liberty University in Lynchburg, Va., and in Spokane, Wash., and Peters says he is talking with several more pastors of existing churches who want to join them.

The 50 or so people in attendance may identify as born-again or just as generic “Bible-loving” Christians. Peters’s flock is not affiliated with a specific denomination, but it does have a distinct identity. The Patriot Churches belong to what religion experts describe as a loosely organized Christian nationalist movement that has flourished under President Trump. In just four years, he has helped reshape the landscape of American Christianity by elevating Christians once considered fringe, including Messianic Jews, preachers of the prosperity gospel and self-styled prophets. At times, this made for some strange bedfellows, but the common thread among them is a sense of being under siege and a belief that America has been and should remain a Christian nation.

Having launched the Patriot Church outside Knoxville, Tenn., on the weekend of Sept. 11, he declares that the Christian faith in America is “under attack.”

For many churchgoers in suburban Knoxville, the political boldness in worship is a breath of fresh air. They complain that social media restricts their free speech, and they fear government-mandated vaccines. And whether Trump wins or loses, religion experts believe these Americans are building powerful networks that are expected to endure long after Trump has left the White House.

Since 2016, much attention has been drawn to the 80 percent of White evangelicals who voted for Trump. And experts say that support is best understood in the context of Christian nationalism.

Sociologist Samuel Perry, co-author of the new book “Taking America Back for God,”says no other factor better predicts a vote for Trump than adherence to a Christian nationalist ideology. Poll data shows it is also a stronger predictor of Americans’ attitudes about race, gender, Islam, family/sexuality issues and mask-wearing than traditional political ideology. More than one-third of Americans say this country has always been and is currently a Christian nation, and 40 percent of Americans agree that God has granted the United States a special role in human history, according to the Public Religion Research Institute.

Trump, in turn, has cultivated a Christian Nationalist image. There was his June stroll across Lafayette Square to hold up a Bible in front of St. John’s Church for a photo op, after having law enforcement remove peaceful protesters with tear gas. When tens of thousands of conservative Christians, including Peters, flooded the Mall in late September for prayer and speeches, the White House issued a statement saying “our country continues to turn to the Lord.” Trump has also used religious language in his public remarks far more often than previous presidents did, according to research from Ceri Hughes from the University of Wisconsin at Madison.

Trump has brought more sentiments about Christian nationalism “to the surface,” says Paul Miller, a professor at Georgetown University who is working on a forthcoming book on nationalism, Christianity and American identity. "He’s given permission to say this stuff out loud. He’s mainstreamed them as prominent evangelical voices.”

Loving America almost as much as heaven

Peters isn’t sure he likes the term “Christian nationalism” because he worries people will equate it with being a white nationalist or someone who hates Muslims and women — all things he disavows. But he concedes it fits the definition of someone who wants America to remain a Christian nation. “Some Christians are trying to shame those who love this country or love President Trump,” he said. “We’re saying, we’re not only unashamed, but we’re going to put it in the name.”

He bristles at fellow Christians who would criticize him for doing so. In August, a group of mostly liberal-leaning Christian leaders condemned Christian nationalism as a “persistent threat” to religious communities and to democracy. More recently, Peters was deeply troubled by a widely shared article from popular evangelical pastor John Piper that blasted Trump, his supporters and Christian nationalism. “Have you inadvertently created the mind-set that the greatest issue in life is saving America and its earthly benefits?” Piper wrote. “Or have you shown your people that the greatest issue is exalting Christ with or without America?”

Like many evangelical pastors, Peters has books by Piper on the shelves in his study at home, alongside popular evangelical works by 18th-century evangelist John Wesley and anti-Nazi dissident Dietrich Bonhoeffer. But Piper’s criticism of people who want to save America, Peters says, is why he started Patriot Church. “Piper and his friends want to make it seem like we love America more than heaven. It’s not true.” Peters believes that Jesus comes first but that the country comes right behind.

Growing up in an evangelical home in Oregon and Washington state, he says he received a sense of urgency from his “culture war” father, who was a Pentecostal preacher in Raymond, Wash. After going to Bible college in Dallas, Peters returned to Washington and eventually settled in Spokane Valley. There, he became a charismatic preacher with a nondenominational congregation of about 250 people.

Two years ago, he began to take his church to the grassy lawn outside a Planned Parenthood facility for what he calls “The Church at Planned Parenthood.” In June, Planned Parenthood sued Peters and other organizers, arguing that they intruded on operations and violated state laws that prohibit noise at health facilities. A judge has ordered the protesters to move their service across the street.

He says he found a pastor who could take over his Covenant Church in Spokane: Matt Shea, a Washington state representative. A year ago, a state House investigation foundthat in November 2015, Shea worked with militant leader Ammon Bundy and helped in the planning and preparation of a six-week takeover of a federal wildlife refuge in 2016. Peters says he has no connections to that Patriot movement and anti-government militant groups. His life’s work is starting churches.

He settled near Knoxville in July after Tennessee pastor Greg Locke, a Trump adviser, encouraged Peters to start a church in his state. Locke also donated $20,000 to the cause, because he contends Christians are in a kind of war with government. “They have us cowered down in a basement with our masks and require our churches to be closed,” Locke said in an interview. “That’s not Christian or American. We’re in the fight for our life.”

Peters convinced about 20 people to follow him from the Spokane area to Tennessee. At a local pizza shop in Knoxville, he stops to speak with two more people who are considering joining him. Diana Martin and her friend drove up from Pensacola, Fla., for the weekend so they could meet with Peters face-to-face to see if they liked what he has planned.

Martin says she wants a church that is more politically active and outward facing, not one that simply holds potluck suppers. Over iced tea, she tells the pastor how they like what Patriot Church is trying to do, and Peters tries to sell her on the friendliness of people in the state.

“There’s a loneliness there,” Martin says of where she lives now. “I want to be with like-minded people.”

‘Dude, this is Trump country’

After the Sunday service in the barn, Joy Stafford is one of two people in a mask, choosing to wear one because she cares for her 89-year-old mother.

“I wish there were more social distancing,” Stafford says.

“Oh, trust the Lord with your health,” another churchgoer tells her.

But Stafford’s friend Nellaine Sutton is delighted by the church’s approach. She says when her church reopened with everyone wearing masks, it felt cold to her. Here, she was welcomed with warm hugs and brochures that encouraged people to remove their masks. Peters says the Patriot Church has averaged between 50 and 100 people each Sunday during its first month.

Sutton plans to come back to learn more about being a Christian Patriot. “When I hear patriot, it’s probably someone who is pro-gun, against mandated vaccinations, probably a Republican and opposes abortion,” she says. “I fit those.”

Another local resident, Susan Gingrich, who is a sister of Republican former House speaker Newt Gingrich, has decided to join the church, saying she is nostalgic for the days when prayer was allowed in schools and pastors could preach about politics without fear of their tax-exempt status being revoked. She was attending a large nondenominational church in Knoxville, but she likes Peters’s mission. “Christians are being persecuted. That’s why we’re raising up people right now. We’ve had it with being second-class citizens,” she says. “Even if Trump wins, the fight isn’t over.”

After the service, Peters and his family pile into their Toyota Highlander and head to a nearby highway overpass. They pull over and, from the back of the SUV, take out giant American and Trump flags, which they wave over the side of the overpass as they cheer at passing cars. Peters especially enjoys the honks from enthusiastic truckers shouting, “God bless!”

“They love us, guys!” Peters says. “Dude, this is Trump country.”

Later that evening, he leads a group of about 20 people from Patriot Church to share popcorn and watch the film “Trump Card” from conservative activist Dinesh D’Souza in a church member’s basement. In 2014, D’Souza pleaded guilty to a felony charge of making an illegal campaign contribution.

The churchgoers nod along and occasionally clap during the film, which includes an animated image of community organizer Saul Alinsky, who is Jewish, pulling a KKK hood over his head. D’Souza and others reject the association that is made between them and any racist or white nationalist causes, claiming Democrats are the real racists.

After the movie, Peters warns that under a President Joe Biden, the “spirit of Jezebel” could spread. “When you’re dealing with bullies, you have to fight back,” he says.

He ends the evening by praying that women and racial minorities would be freed from their deception that the Democratic Party has their best interests at heart.

“The left doesn’t love the country at its roots,” Peters says. “Freedom is the way, not the value system of the left, which is totally anti-Bible. But the Bible is the answer, and Jesus is the answer.” 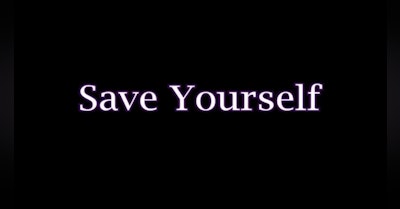