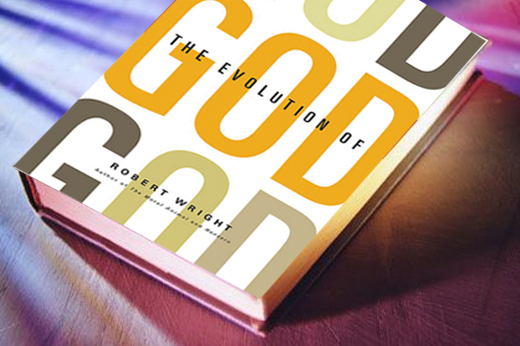 Robert Wright’s “The Evolution of God” both surveys the history of religion and offers a new theory to explain why this history unfolded as it did.

Robert Wright is not afraid to think big thoughts. Wright, who contributes regularly to a host of magazines including Slate and Time and who edits the Web site Bloggingheads.tv, has written several intellectually ambitious books. In TheMoral Animal (1997), for example, he considered the young (and controversial) science of evolutionary psychology. And in Nonzero (2001), he offered a heady tour of human history and argued that ideas from the mathematical field of game theory reveal how much of that history was driven by the mutual benefits that accrue from human cooperation. In his latest book, Wright takes on an even grander subject: religion. In The Evolution of God, he both surveys the history of religion and, more important, offers a new theory to explain why this history unfolded as it did.

According to Wright’s theory, although religion may seem otherworldly—a realm of revelation and spirituality—its history has, like that of much else, been driven by mundane “facts on the ground.” Religion, that is, changes through time primarily because it responds to changing circumstances in the real world: economics, politics, and war. Wright thus offers what he emphasizes is a materialist account of religion. As he further emphasizes, the ways in which religion responds to the world make sense. Like organisms, religions respond adaptively to the world.

More formally, Wright argues that religious responses to reality are generally explained by game theory and evolutionary psychology, the subjects of his previous books. Subtle aspects of the human mind, he claims, were shaped by Darwinian natural selection to allow us to recognize and take advantage of certain social situations. The most important of these—and the centerpiece of Wright’s theory—are what game theorists call non-zero-sum interactions. Unlike zero-sum games, wherein one player’s gain is another player’s loss, in some games both players can win; hence “non-zero-sum.” The classic example is economic trade. In a free market, trade occurs when both parties benefit from exchange (otherwise they wouldn’t engage in it).

As technologies, particularly transportation, improved throughout history, cultures collided and human beings encountered more and more of these non-zero-sum opportunities. Religion, Wright says, responded rationally to these encounters. For example, religious doctrine grew more tolerant of other faiths when tolerance helped smooth economic or political interactions that were potentially win-win: it’s wise to respect the other fellow’s gods when you want to trade or form military alliances with him. (Wright suggests that these responses were often unconscious, not cynical.) One consequence of the growing number of non-zero-sum interactions was that, through time, the “moral circle” expanded. While primitive man tended to view only his clan or tribe as fully human and so worthy of moral consideration, the ties forged among peoples via their cooperative interactions encouraged them to expand the moral circle from tribe, to ethnic group, to nation, and ultimately to all human beings.